Britax Frontier vs Pioneer – Which Car Seat is Best?

Britax has been designing and producing safety products since the 1930s, with child car seats being a major area of focus for them since the mid-1960s. Since their first US-based child car seat, cleverly named the 'Freeway,' they have brought several innovative and groundbreaking features to market. Evidence of that is seen today, in another two of their aptly named child car seats, the Pioneer and the Frontier 'Clicktight'.

Normally we would compare products from two different manufacturers, (Britax vs Chicco for instance) but today we are going to have the 'Battle of Britax’ and see in a head-to-head who comes out top in their Pioneer vs Frontier models.

We'll look at features in areas such as comfort, safety, and ease of use, plus highlight one or two benefits that you may not have considered previously when thinking about which child car seat to purchase. We're already familiar with the different versions of the Britax Frontier that have developed over the years but haven't reviewed the Pioneer before so we're looking forward to learning the differences between the two.

We'll finish by giving you our verdict on who the winner is in Britax Pioneer vs. Frontier (if there is one) and even if it's tied, at least you will have all the information you need to make your own choice.

What the Pioneer and the Frontier have in Common

Let's start by looking at all the features and benefits that the Britax Pioneer and the Britax Frontier share. Although this might seem unnecessary when we are doing a comparison, some of these features are extremely important in terms of child car seat safety.

By knowing what each of these seats offers in these areas, it will 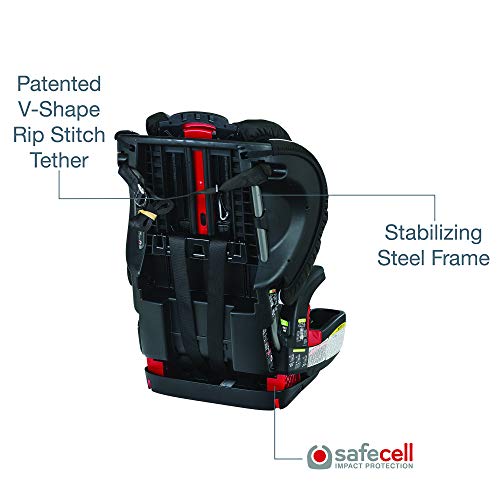 The first thing to note about these models is that they are Combination Car Seats also commonly known as harnessed booster seats. Check out our article on understanding car seat types for more on this.

These seats are for children over the age of two and used in the forward facing position. They transition from a forward-facing seat with a harness and tether into a booster seat as your child grows.

Neither of these child car seats wins the Pioneer vs Frontier competition for seat depth and width as they are the same at 13.5 inches and 12 inches respectively. A shoulder width of 15 inches is common to them both.

Harness lengths and adjustment heights are identical too. The harness lengths range between 28 inches and 35 inches, with slot heights ranging from 12.5 inches, up to 20.5 inches. This means that on both child car seats, as your child grows you will be able to adjust the harness accordingly to fit them safely and comfortably. 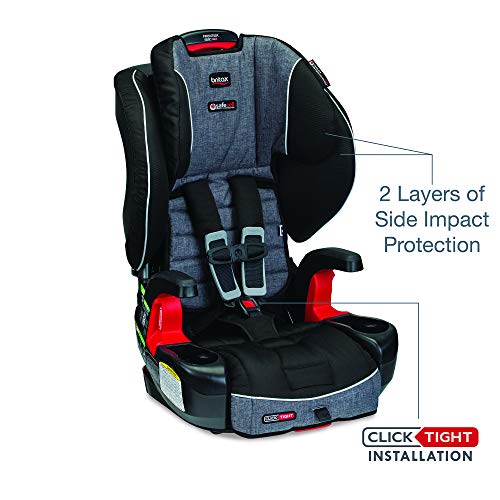 ​Both child car seats are designed to be forward facing, and therefore neither of them is suitable for babies or infants under the age of 2 years.

The recommended weight range for both the Pioneer and the Frontier starts from 25 lbs., and the child's height should be between 30 inches and 58 inches for both seats.

If your child gets thirsty both seats have cupholders where a cup of their favorite juice or milkshake can be placed, so they can reach it easily.

Moving a stage further, if they should spill that same drink on the seat, or if anything else should manage to stain the fabric, then both the Pioneer and the Frontier have removable covers. These can be removed without the hassle of having to unthread or rethread the harness to get them on and off.

Britax does not recommend washing either of the covers in a washing machine, although there are some customers who claim they have done so on a delicate/hand-wash setting. We suggest you follow the manufacturer's guidance on this. 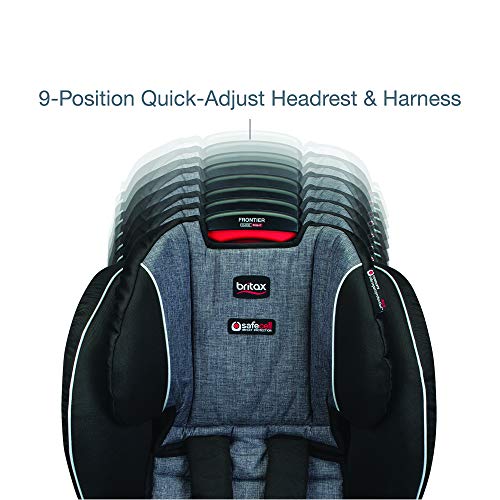 The Pioneer and Frontier both employ head and side impact protection which consists of a steel frame, a heavy-duty shell, and double layers of foam to absorb energy.

Britax calls this safety setup 'Safecell,' which also has a tether system designed to reduce the child's forward movement should the vehicle they are travelling in be involved in a head-on collision.

So, up until now, we hope you'll agree that the Pioneer vs Frontier has been an even contest, and one that has been of a very high standard too, given the number of very impressive features which they both offer. Now it is time to see where they differ, with a view to seeing if either of them can press home any advantages.

While you are not exactly going to be walking around with either of these for any length of time, the lighter they are when you need to carry them from your home to your car or back again, the better.

Ultimately if you want either of these child car seats you are going to pay for them, so let's give you the lowdown on what you can expect to pay for them. Most online retailers have the Pioneer priced between $189.99 and $230. For the Frontier, the pricing is more likely to be closer to $279.99 up to $339.99.

You might think that is quite a jump, for the Frontier, considering most of its features are very similar, but there is one feature which we have yet to discuss, and it’s a very important one that justifies the difference.

One of the critical elements of a child car seat being safe is its installation into the car. The Pioneer uses 'Latch' connectors, which is a universal anchorage system used by most car seat manufacturers.

While 'Latch' is perfectly safe, the Frontier offers something even better called 'Clicktight.' It has been specifically engineered to make installing a child car seat quick, and most importantly, extremely safe. It utilizes your car's seatbelts and is recognized as one of the easiest installation systems available for child car seats.

Well, it came right down to the wire, and to be honest, both child car seats deserve a medal for their safety features and the comfort they provide for any child sitting in them. The ​Britax Pioneer​ is lighter to carry, although this may be at the price of not having as big a maximum weight capacity as the ​Frontier​.

Speaking of price, the Pioneer certainly wins on that, and if your budget is tight, then it is a perfectly safe option, which we are more than happy to recommend.

However, the Frontier 'Clicktight' system, makes installing your child's car seat quick, easy and safe, and with this feature we believe the extra it costs, is more than worth it.

Britax vs Graco – which car seat brand to choose?

Britax vs Chicco – Which Car Seat Is Best?